Say No to Expansion of Aviation 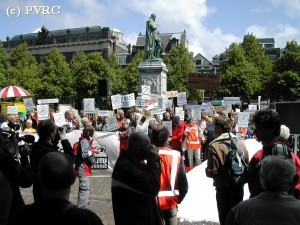 Why this is important
Despite the ill effects on our health, sleep, safety, nature and climate, global aviation is growing and expected to expand enormously. We are silenced with promises of less noise and pollution which always turn out to be false. New airports are built, destroying forests and the homes of people.

Health effects
Plane exhausts (particulates and ozone) contribute to poor health, and not just for those people living close to the airport. Studies indicate that ultrafine particles penetrate deep in the lungs and blood. Plane exhaust kills more people than plane crashes. The most common causes of death due to air pollution are cardiovascular and respiratory diseases, including lung cancer, according to the UN's World Health Organization.

Not only people living near airports are affected by airplane noise, but also those living far away.

Safety
A lot of airports are situated near cities. This implicates a lot of victims in case of plane crashes.

Climate
Plane exhausts (CO2, NOx) are changing the climate rapidly. Planes also form clouds (contrails) which also affect our climate tremendously. This also diminishes the number of sunny days. In general, we tend to focus on the effects of CO2, but combined all these almost triple the negative effect on climate.

Nature
We need nature to relax, to wind down. Walking in nature decreases mental fatigue, lowers stress hormones and blood pressure. However, more and more peace and calmness in nature are disturbed by the noise of airplanes, preventing us to relax.
Some plane exhaust (NOx) acidify the soil. This causes big problems in nature such as the extinction of plants, which in turn affects animals.