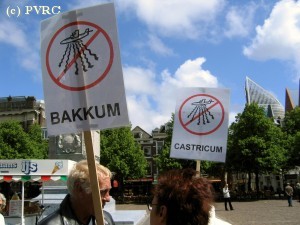 Heathrow airport’s owner BAA was isolated and assailed from all sides yesterday as it headed for a legal and physical showdown with protesters over an attempt to ban a mass demonstration against climate change that has enraged civil rights groups.

Within hours of its disclosure, politicians, lawyers and protesters condemned an injunction that would prevent five million members of the public from attending the Camp for Climate Action as “ludicrous,” ” absurd” and “unenforceable”.

The capital’s transport authority, Transport for London (TfL), was furious at the inclusion of the Piccadilly line in a list of places police could arrest protesters and demanded it be dropped from the action. Ken Livingstone, the Mayor of London, denounced BAA’s plans as a “serious infringement of civil liberties and an attack on the right to peaceful protest”. Britain’s biggest environmental organisation, the National Trust, described the court action as “over the top”, warning that it “smacked of absurdity”.

BAA insisted that it would not back down but said that it would amend or drop the injunction if the protesters gave undertakings about their intentions.

But the the Camp for Climate Action insisted that the week-long action from 14 August would take place regardless of the High Court case on Wednesday. Up to 5,000 people are expected to attend what could be the biggest protest against climate change in the UK.

BAA was besieged with hundreds of calls from the public yesterday asking if they would be barred from Heathrow.

On Monday, BAA served the draft injunction on four activists representing five environmental organisations opposing the airport’s expansion. One of the organisations, AirportWatch, is a coalition of 10 green groups including the RSPB, the Woodland Trust and the Council for the Protection of Rural England - bringing five million members into the action. It would force protesters to give 24 hours’ notice together with their names and ban them from going within 100 metres of any airport installation.

Anyone deemed to be breaking or intending to break its terms could be arrested on the Piccadilly line of the London Underground, platforms six and seven of Paddington station, which serves the Heathrow Express, and sections of the M25 and M4 motorways, as well as the airport and its vicinity.

TfL wrote last night to BAA demanding the removal of all references to the London Underground from the action. A spokesman said: “There was a huge amount of anger here because there was no consultation about the terms of the injunction. The first we knew about it was when we read about it in The Independent. An injunction of that kind would be completely unenforceable ... It would be massively disruptive to the network.”

Nick Clegg, the Liberal Democrats’ home affairs spokesman, said: “BAA must have taken leave of its senses if it sincerely believes that the threat of a peaceful demonstration about the environment should merit the use of police state powers to chase environmental campaigners across the London transport network. This idea is daft, illiberal and dangerous nonsense.”

Theresa Villiers, the Conservatives’ transport spokeswoman, said: “I can understand BAA would want to take steps to prevent the disruption of the summer rush at Heathrow. But what they seem to be applying for in court appears to be over the top.”

Ed Blissett, of the GMB union, said yesterday: “We back the development of Britain’s airports but cannot support anything that limits unduly the fundamental right to protest and oppose in a peaceful and law-abiding manner. ”

The Department of Transport said that the issue was a matter for the courts but disliked the curtailment of peaceful protest.

BAA reiterated that it had a duty to protect the airport from protests that might disrupt passengers. The Spanish-owned corporation said it was ” willing to negotiate” about the size of the three designated protest areas on the fringe of the airport. “We are not seeking to stop people protesting: that would be wrong. We are seeking to stop people who are unlawfully causing disruption,” a spokesman insisted.

Protesters agreed that their action might disrupt flights while Heathrow experiences its peak season. “Almost inevitably, it will involve some disruption to the airport,” said Climate Camp’s spokesman, Dave Spencer. “We can’t just stand in a field with some banners.” But he stressed that the aim was to target the airline industry, not passengers, to step up pressure for action on global warming.

Ministers have approved in principle the building of a third runway at Heathrow, which could lead to a 50 per cent increase in flights to 800,000 a year.

John Stewart, chairman of the local protest group Hacan, complained that the injunction had wrongly targeted his organisation. “Our members are furious,” he said. “We are not a direct action organisation. Isn’t it time for BAA to face up to the fact that Heathrow is big enough already rather than trying to get this ridiculous injunction?”

* One of the first major public clashes between protesters and the authorities came on 16 August 1819 at the “Battle of Peterloo” in St Peter’s Fields, Manchester. About 80,000 apparently peaceful protesters had gathered to hear Richard Carlile, John Cartwright and Henry Hunt appeal for the abolition of the Corn Laws, when, at about lunchtime, the nervous magistrates, having never seen anything like it, read the Riot Act before the police ordered 60 cavalrymen to charge the speakers’ platform. Eleven demonstrators were killed and hundreds injured.

* The original working class political movement emerged called the Birmingham Political Union, founded in 1830 by Thomas Atwood. Its stated aim was for the House of Commons to “be achieved by a general political union of the lower and middle classes of the people”.

* This made way for the Chartist movement, an umbrella movement in favour of stepping up the pace of liberal democratic reform in the mid-19th century. Its anchor was the People’s Charter, founded by six MPs in 1838, the stated objectives of which included universal suffrage, for men only, over the age of 21, voting by secret ballot and regular elections to Parliament. On 10 April 1848 50,000 marched on Parliament from Kennington Green.

* One huge area of reform had been left off the agenda, however: women’s emancipation. The 1832 Act had actually prohibited women from voting and throughout the next hundred years the women’s rights movement grew. In 1889 its leader, Emily Pankhurst founded the Women’s Franchise League, which became the Women’s Social and Political Union. On 4 June 1913, the militant Suffragette Emily Davison ran out in front of the horse of King George V at the Epson Derby, and died. The dramatic gesture paid off, with voting rights for women beginning in 1918.

* The 1960s saw all manner of protest for social reform, from racial equality and civil rights to female and homosexual rights, all of which were the focus of legislative reforms in subsequent years. The late 1960s witnessed violent protests outside the American Embassy in Grosvenor Square against the Vietnam war. While not immediately successful, they highlighted the extent of international discontent at the apparently futile and destructive war.

* In the 1980s, there was the Miners’ Strike and the poll tax riots. The former, started after the beginning of mass pits closures under the Tories, was the defining moment in British industrial relations. Arthur Scargill, who refused to call a ballot of the National Union of Mineworkers, led his men into defeat, resulting in the crushing of union power by Mrs Thatcher and, later, Tony Blair. The coal miners were, in electricians’ leader Eric Hammond’s description, “lions led by donkeys”.

* Mrs Thatcher’s introduction of the Poll Tax (or community charge) - a flat-tax for all working adults, regardless of wealth variation - in 1990, resulted in some of the most violent peacetime clashes and on 31 March 1990, more than 200,000 demonstrators marched through London. Starting in Kennington, the rioters ended up in Westminster and Whitehall, cramming into Trafalgar Square in the early hours for the “Battle of Trafalgar”.

* In November last year, some 25,000 marched from the US embassy to Trafalgar Square to protest for action on climate change.

* But perhaps the most famous modern protest came in February 2003, when more than a million people marched on central London to stop the drum-beat to the Iraq invasion.

Voor het artikel in de in The Independent klik ==>> hier